All About Art Nouveau Architecture 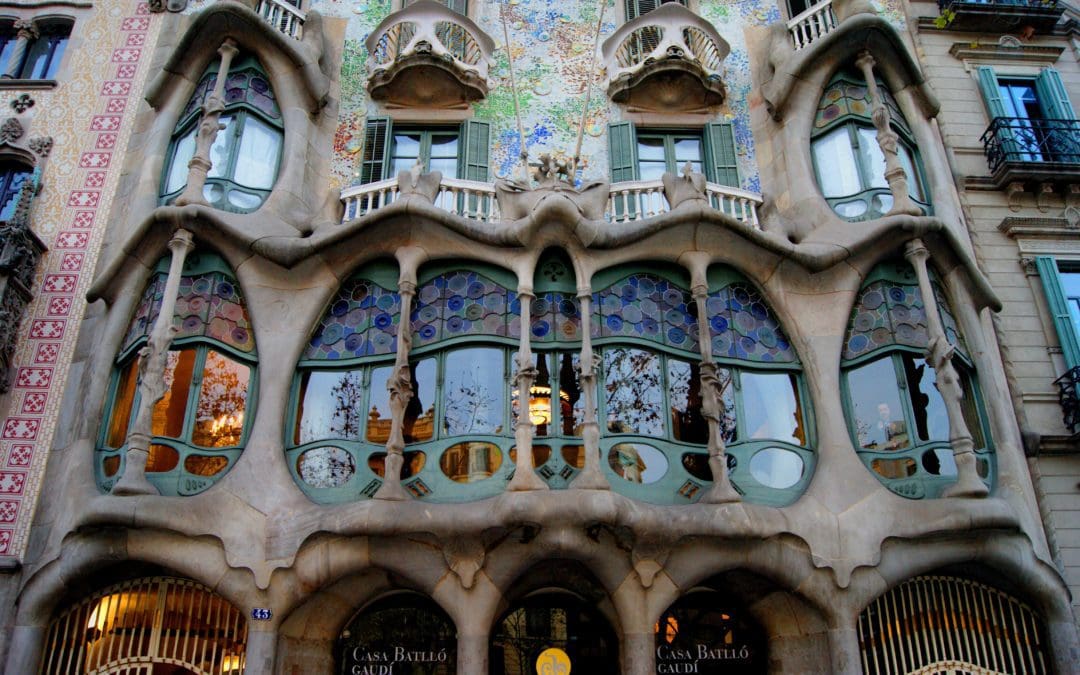 In our last post, we continued our “All About” series where we take a look at different styles of architecture. In this series, we aim to explore the characteristics of these styles, how they evolved, where they were most prevalent, and some of the best examples of the styles. Our goal with this series is to educate and inspire anyone out there who is interested in architecture! The last style we discussed was Baroque architecture, which is a highly decorative style that appeared in Italy in the early 17th century. If you are interested in learning more about the Baroque style of architecture, check out our last post!

Today, we’ll be continuing this series by taking a look at Art Nouveau architecture! The Art Nouveau movement was an international style that first appeared in the late 19th and early 20th century and was inspired by the natural world. This style reached its peak mainly between 1890 to 1910 in Europe and the United States. It developed from the ornamental style of art with the same name, and was a deliberate attempt at creating a new style free of the historicism that heavily influenced much of 19th-century art and design. If you are interested in learning more about Art Nouveau architecture, you’re in the right place! Let’s get started.

What is Art Nouveau?

The Art Nouveau movement aimed to break down the distinction between fine arts and applied arts– Fine arts generally consisted of painting and sculpture, while applied arts consisted of furniture, metalwork, and tapestry. In Britain, the movement was influenced by the Arts and Crafts movement, which began as a reaction against a decline in standards. Like the Arts and Crafts movement, Art Nouveau valued quality and craftsmanship. Another major influence was Aestheticism, a movement that embraced the aesthetic value of the arts. The term Art Nouveau literally means “new style” in French, and the term first appeared in Belgium, which is considered to be one of the earliest locations for the movement. Despite being heavily concentrated in Europe and the United States, Art Nouveau is considered an international style, because variations of the movement can be found in a multitude of countries, including Spain, Germany, and France. These variations are known as different names. For example, it is known as Modernism in Spain, and Jugendstil in Germany.

This style was employed most often in architecture, interior design, jewelry, glass design, and illustration. One of the most distinguishing characteristics of Art Nouveau is its rolling, asymmetrical lines. These lines often take the shape of vines, leaves, flower stalks, and other delicate and curved natural objects. The style incorporates sculptural and organic shapes and arches to create a fusion between structure and ornament. Since Art Nouveau is inspired by the natural world, the style often includes natural objects such as plants, insects, and animals. On both the inside and outside of Art Nouveau buildings, it is not uncommon to see intricate mosaic work, stained glass, and decorative wrought iron. Interestingly enough, along with its extensive use of arches and curved glass, Japanese motifs are incorporated into some buildings of this style. This is because the movement was partially inspired by the popularity of linear patterns found in Japanese prints, known as ukiyo-e. This was the process of creating woodblock prints, utilizing space, color, and decorative patterns.

Some of the most well-known architects of the Art Nouveau movement include Hector Guimard and Antoni Gaudí. Hector Guimard was a French architect who achieved fame for designing the first Art Nouveau apartment building in Paris, known as the Castel Béranger. Guimard is the most well-known French Art Nouveau architect and many of his works included intricate floral imagery created with iron, glass, and carved stone. Antoni Gaudí was an architect from Spain who was heavily influenced by Art Nouveau, which led him to experiment with new materials and shapes. He became the best-known representative of Catalan Modernisme, which was the name for Art Nouveau in the Catalan culture within Spain. In the United States, one of the best-known representatives of the style was Louis Comfort Tiffany, an artist and designer. He is best known for his work in stained glass, particularly for the creation of the iconic Tiffany lamp. Because of this, he is the American artist most associated with Art Nouveau, which is sometimes referred to as Tiffany Style in the states.

When it comes to Art Nouveau architecture, one of the best examples is the Casa Batlló in Spain, which was designed by Antoni Gaudí. This building sits in the center of Barcelona and is considered one of Gaudí’s best works. The original building was built in 1877 and was purchased by Josep Batlló y Casanovas, a businessman who owned several factories in the textile industry. He gave full creative freedom to Gaudí, putting him in charge of a project that initially involved demolishing the building. Instead, Gaudí proposed a complete reform and redesign of the building. The façade of the building is hard to miss– It features a mixture of bright colors and harmonic motion, all thanks to vine-like curves and pieces of glazed ceramic and glass, which glow or glitter in the sunlight. The building truly looks like something out of a fairytale, especially as the eyes wander up towards the roof, which has the appearance of reptilian scales. This stunning example of Art Nouveau architecture features sculptures, recycled materials, and– of course– inspiration from the natural world.

Another great example of Art Nouveau architecture is the Hôtel Saint Cyr, or the Saint-Cyr House, in Brussels, Belgium. It was designed by a young architect named Gustave Strauwen and built between 1900 and 1903 as the residence of painter and decorator Léonard Saint-Cyr. The townhouse’s exterior is only about 13 feet wide but features stunning details that set it apart from other buildings on the street. Interestingly enough, critics have expressed their disapproval of the design for this same reason. The façade of the building features gorgeous green ironwork that resembles vines and vegetation, creating a sense of movement and drawing inspiration from the natural world, in true Art Nouveau fashion. It features elegant and flamboyant balustrades on each floor. Despite criticism, the Saint-Cyr House is one of the most renowned and coveted buildings by architecture enthusiasts.

As you can see Art Nouveau is a fun and unique style of architecture. The style values quality and craftsmanship, and every building created in this style shines in its own unique way! We hope you found this article informative and we hope to see you back on the blog soon as we continue to dive into various topics regarding architecture. Perhaps something might spark inspiration for your next project! For more information on architectural design and building, keep up-to-date with the Architecture Plus blog. If you’re ready to sit down with an experienced team of designers and hash out the elements of your next project, reach out to us! We’re eager to hear from you. Until next time, thank you for reading!