All About Art Deco Architecture 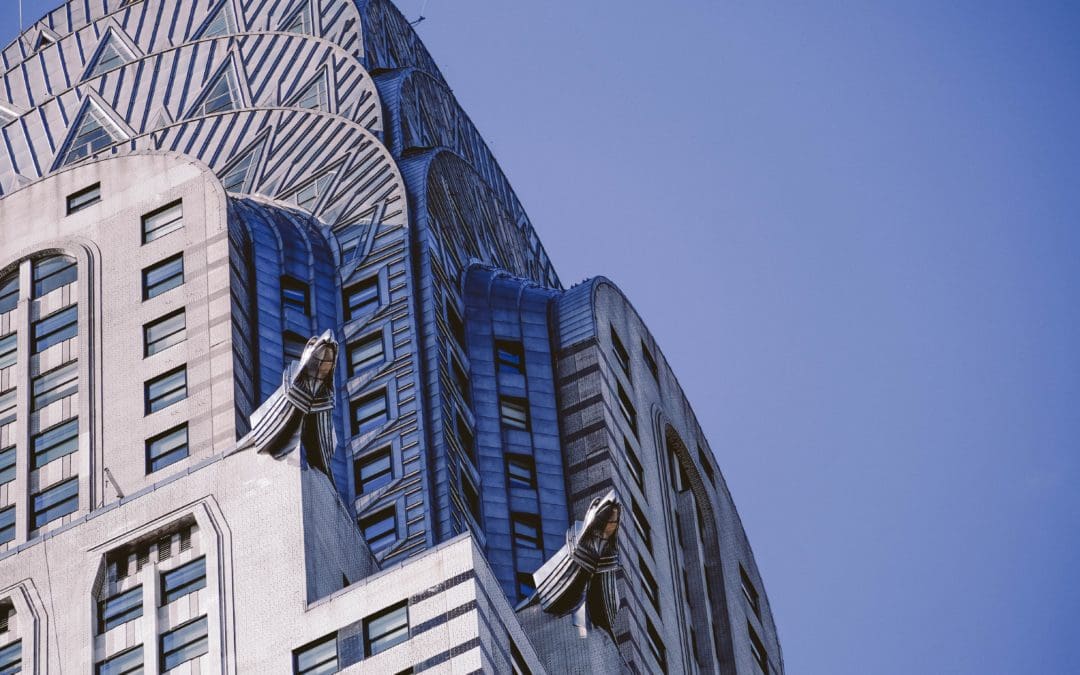 Hello, readers! Welcome to the Architecture Plus blog! We provide useful information concerning architecture design, unique trends, and essential aspects of the residential and commercial building process. Based out of Charleston, our full-service architecture firm specializes in new residential construction, renovation, and commercial design. We aim to create sustainable structures which facilitate the health of their inhabitants while pairing harmoniously with their surrounding community. We encourage you to take a look at our residential and commercial galleries to glimpse our work and assess our artistic vision. If you need any additional information, reach out to us!

In our last blog, we began our “All About” series where we take a look at different styles of architecture. In this series, we aim to explore the characteristics of these styles, how they evolved, where they were most prevalent, and some of the best examples of the styles. Our goal with this series is to educate and inspire anyone out there who is interested in architecture! In our first post of this series, we took a look at Gothic architecture, a style that was prevalent from the late 12th to the 16th century in Europe. If you’re interested in learning more about Gothic architecture, we encourage you to check out our last post!

Today, we’ll be continuing this series by discussing Art Deco-style architecture. This style began as a movement in decorative arts, originating in the 1920s and developing into a major style in western Europe and the United States in the 1930s. It influenced the design of everything from buildings to furniture and from fashion to cars. If you’re interested in learning everything there is to know about Art Deco, you’re in the right place! Let’s get right into it.

Sometimes called simply Deco or style moderne, this style was seen throughout Paris in the early 1920s. In the United States, the style first garnered public attention in 1922 in a design competition for the Chicago Tribune Headquarters where a Finnish architect named Eliel Saarinen submitted an Art Deco design. Although the design was not chosen, it was widely publicized. Many people were fascinated by this new architectural style. Its name derives from the Exposition Internationale des Arts Décoratifs et Industriels Modernes, a design show held in Paris in 1925, where the style made its first official appearance. After this, the style drastically increased in popularity. The Art Deco style represented modernism turned into fashion and was an effort to embody the ideas of the modern age. Art Deco is often associated with a sense of luxury.

At its core, Art Deco was influenced by Cubism and Fauvism. One of its most defining characteristics is its geometric forms. Art Deco took the selective geometry of Cubism and developed it further, incorporating a wider variety of shapes. These geometric forms are sleek, linear, and often rectangular, arranged and broken up by ornate detailing. Some common motifs used within the Art Deco style include pyramids, zigzags, and chevrons. Additionally, the Art Deco style utilized bright, contrasting colors, much like the art style of Fauvism, which involved the use of complementary colors. Buildings constructed in the Art Deco style often boasted colors such as black and white or gold and silver to create a stark contrast. This architectural style was also influenced by the exoticized styles of China, Japan, India, and ancient Mayan civilizations. Another defining feature of the Art Deco style is the use of modern and traditional building materials. These materials are often varied and feature a distinctive, smooth finish. Materials used include stucco, terracotta, concrete, decorative glass, chrome, glazed brick, or mosaic tile.

Art Deco buildings have a sleek, linear appearance and often feature a series of stepbacks that create a stepped outline on one side of the building. This part of the building is known as the façade, which refers to one side of the exterior of a building, usually the front. It is an integral part of the overall design of the building. Many of the façades of Art Deco buildings feature geometric patterns such as zigzags or sunbursts. Façades were also created using vertical, angular lines that pointed upward and outward, creating triangular shapes. These buildings also feature decorative, geometric windows. The windows are often positioned in a long, horizontal row.

Because Art Deco was seen as a rejection of historic precedents and used new construction technology, it was suitable for the design of the skyscraper, which was the 20th century’s new emerging building form at the time. Due to this, perhaps one of the most well-known examples of the Art Deco style is the Empire State Building, located in New York City. The Empire State Building was designed by Shreve, Lamb & Harmon, an architectural firm, and built from 1930 to 1931. This 102-story skyscraper’s façade is made up of Indiana limestone panels. Sculpted concrete eagles adorn the entrance, serving as the tower’s ornament. Additionally, the iconic spire on top of the building serves as another distinct characteristic of the Art Deco style.

New York City is actually home to many well-known examples of the Art Deco architectural style. Completed in 1930, the Chrysler Building was the world’s tallest building before the Empire State Building surpassed it. It was designed by William Van Alen, an American architect, and consists of a steel frame and areas of decorative metal cladding. It is renowned for its terraced crown. An extension of the main tower, the crown is composed of seven arches boasting a radiating sunburst pattern with numerous triangular vaulted windows.

Another great example of Art Deco is the Hoover Building in London, England. Designed by the architectural partnership of Wallis, Gilbert and Partners, it was opened in 1933 as the UK headquarters and manufacturing plant of The Hoover Company, a home appliance company based in Ohio, perhaps known best for its electric vacuum cleaner. The building consisted of large columns, bay windows, and a curved profile serving as its façade. The main entrance was adorned with a geometric sunburst pattern, featuring bold, vibrant colors. The color palette was heavily influenced by Aztec and Mayan civilizations that were on display at the Exposition Internationale des Arts Décoratifs et Industriels Modernes in Paris. Today, the building has been converted into 66 residential apartments, and many of its Art Deco features have since been refurbished.

By the late 1930s, an international style of Art Deco emerged. Called Streamline Moderne, the style is sometimes referred to as Streamline or Art Moderne. This style of architecture and design was inspired by aerodynamic design. It was seen as a response to the Great Depression, as Art Deco was stripped of its ornament. This new evolution of the style emphasized curving forms, scientific thinking, and sometimes nautical elements. The ornament was replaced with smooth concrete and glass, and sharp angles were replaced with curves. Streamline Moderne often appeared in buildings related to transportation and movement, such as bus stations or airport terminals. Some distinctive features of this style include flat roofs, rounded corners, and porthole windows. Where Art Deco embraced vibrant color, Streamline Moderne often consisted of pure white buildings.

A great example of Streamline, or Art Moderne, architecture can be found right here in South Carolina. The Palmetto Theater, located in Hampton, is a historic movie theater built in 1946 by Clarence L. Freeman. Its construction reflects the limited availability of construction materials following World War II. This Art Deco-influenced building features an ornate marquee full of geometric patterns. Today, the façade is almost entirely original, and the interior also boasts key features of its original Art Deco influences.

As you can see, Art Deco is an incredibly fun and fascinating architectural style. The style is still loved today and has begun to see a comeback since the COVID-19 pandemic. Just as Art Moderne evolved from Art Deco after the Great Depression, it is highly likely that we will see another evolution of architecture post-pandemic. We hope you found this article informative and we hope to see you back on the blog soon as we continue to dive into various topics regarding architecture. Perhaps something might spark inspiration for your next project! For more information on architectural design and building, keep up-to-date with the Architecture Plus blog. If you’re ready to sit down with an experienced team of designers and hash out the elements of your next project, reach out to us! We’re eager to hear from you. Until next time, thank you for reading!