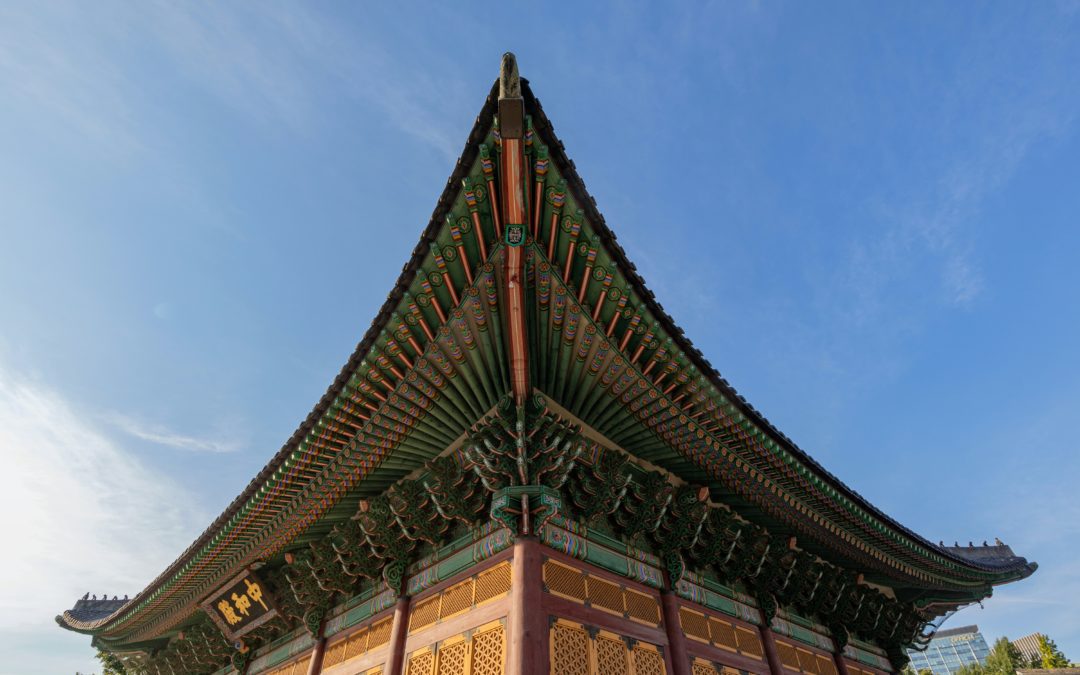 Today, we’ll be continuing our series by taking a look at the architecture of Korea. The style of Korean architecture has developed over centuries and has influences rooted in Buddhism and Korean Confucianism. The style is generally characterized by naturalistic tendencies, simplicity, the avoidance of extremes, and the economy of shape. We invite you to keep reading as we begin our journey of exploring Korean architecture! Let’s get started.

The first Korean kingdom was known as Gojoseon and was estimated to have been established around 2300 BCE, and lasted until around 108 BCE when the Han dynasty of China took over the area. Buddhism was introduced around 372, during the Goguryeo dynasty, which influenced the construction of religious architecture such as Buddhist temples. When an influential Chinese monk by the name of Ado arrived and inspired King Sosurim, the King ordered the first two temples to be built in 375.

Korean Buddhist temples have many characteristics in common, though they can vary depending on the location and era in which they were built. All temples are built following principles of geomancy, which is a Chinese tradition of placing architectural structures strategically. Typically, a winding path leads up to the temple, where there is usually a series of gates that reflect Buddhist teachings. The temples often include pagodas, which are tiered towers. Pagodas can be made from wood, brick, marble, granite, or other stone materials. Stone pagodas are the most common, due to Korea having a great abundance of granite. Korean pagodas have developed their own distinctive style over the centuries, making them look quite different from traditional Chinese pagodas, which have an octagonal or pentagonal form. There are no surviving temples from the Goryeo dynasty today, because they made temples largely out of wood, which does not hold up well over time.

As far as residential buildings, Korean architects have had to take into account the topography of the land. Korea is vastly made up of mountains, which largely influenced the design of buildings and where they were placed. It has always been important to Koreans to make sure buildings blend into their local surroundings, which is known as pungsu. Many Korean architects decided that the best place for constructing buildings was backed by mountains to block the wind, opening to a wide plain with a river running through it. It was also considered extremely important to have a nice view– So, sometimes entire villages would be built facing the same direction. This particular positioning of buildings is known as Baesanimsu.

The architectural term for traditional Korean houses is Hanok, and is sometimes referred to as Chosun houses. Each house is built in the Baesanimsu style mentioned above; with mountains in the back, and facing the water. Hanok were first designed and built in the 14th century, during the Joseon Dynasty. The shape of these houses can differ by region, with architects putting much consideration into the land and seasons of the area. One unique feature of Hanok is the use of Ondol, a floor-based heating system. This is an underfloor heating system that utilizes heat transfer from wood smoke to heat the underside of the floor. This system has been around for many years– In fact, it is believed to have originated during the Bronze Age (900 – 800 BC). The use of this system has been uncovered at archaeological sites in present-day North Korea. This traditional heating system has changed slightly over the years, but is still in use today. 90% of modern Korean homes still heat their floors through hot water pipes or electrically.

During the Joseon Dynasty from 1392 to 1910, eight royal palaces were built. The architecture of these palaces are original to Korea, showing no similarities to that of China or Japan. During this time period, Neo-Confucianism was on the rise and Korea gradually shifted from the construction of Buddhist temples to Confucian institutions. Neo-Confucianism inspired new architectural patterns, such as clan memorial halls, known as jaesil, and memorial shrines, known as jongmyo. These structures favored practicality and harmony with nature while abiding by the Confucian ideology of ancestral worship.

Today, Korean homes still borrow elements from Hanok, while adding modern twists. These modern homes feature sleek lines, geometric angles, open space, pavilions, and often curvy, tiled roofing. As mentioned above, the homes utilize a unique underfloor heating system, but the wooden flooring is also made to cool off during the scorching summer. These homes emphasize living in harmony with nature, often with beautiful courtyards and strategically arranged plants, as well as careful use of materials. Commonly used materials include timber, soil, and rock, but the materials used may depend on the region. For example, in areas that are more mountainous and rich with pine trees, roofs are often made with wooden panels. In contrast, areas such as Jeju Island utilize rocks and stones in architecture, due to the often windy weather. Hanok homes can be seen throughout small towns, although most of them are now built in remote areas in order to truly embrace nature.

There are a number of Hanok villages that can be visited today, full of traditional Korean homes that have been restored in order to preserve their original environment and beauty. One such area is the Bukchon Hanok Village in Seoul. The village was once the dwelling of nobility and Joseon Dynasty officials, and is made up of five neighborhoods with over 900 houses that are preserved to showcase the urban environment that was built nearly 600 years ago. By showcasing the area’s rich history and architecture, visitors can immerse themselves in a magical atmosphere and feel as though they have traveled back in time. These Hanok homes are made with clay, stone flooring, and ancient tile roofing.

One influential Korean architect was Kim Swoo-geun, who took an interest in architecture from a very young age. He attended Seoul National University where he majored in architecture, before pulling out during the Korean War in 1952. He then went to Japan’s Tokyo National University of Fine Arts and Music where he studied modern architecture and received his master’s degree from Tokyo University. Kim designed and worked on over 200 projects both inside and outside of Korea during his lifetime. One of his most well-known works is the Seoul Olympic Stadium, also known as the Jamsil Olympic Stadium. Originally built for the 1988 Summer Olympics, the lines of the stadium’s profile are intended to look like the curves of a porcelain vase from the Joseon Dynasty. The stadium represents a significant moment in Korea’s modern history, just as Kim is recognized as a significant contributor to Korean architecture.

As you can see, Korea is rich in history and culture which is reflected in its unique architecture. It is incredibly interesting how historic elements of architecture are still incorporated into structures today! We hope you found this article informative and we hope to see you back on the blog soon as we explore more architectural styles around the world. Perhaps something might spark inspiration for your next project! For more information on architectural design and building, keep up-to-date with the Architecture Plus blog. If you’re ready to sit down with an experienced team of designers and hash out the elements of your next project, reach out to us! We’re eager to hear from you. Until next time, thank you for reading!