All About Pueblo Revival Architecture 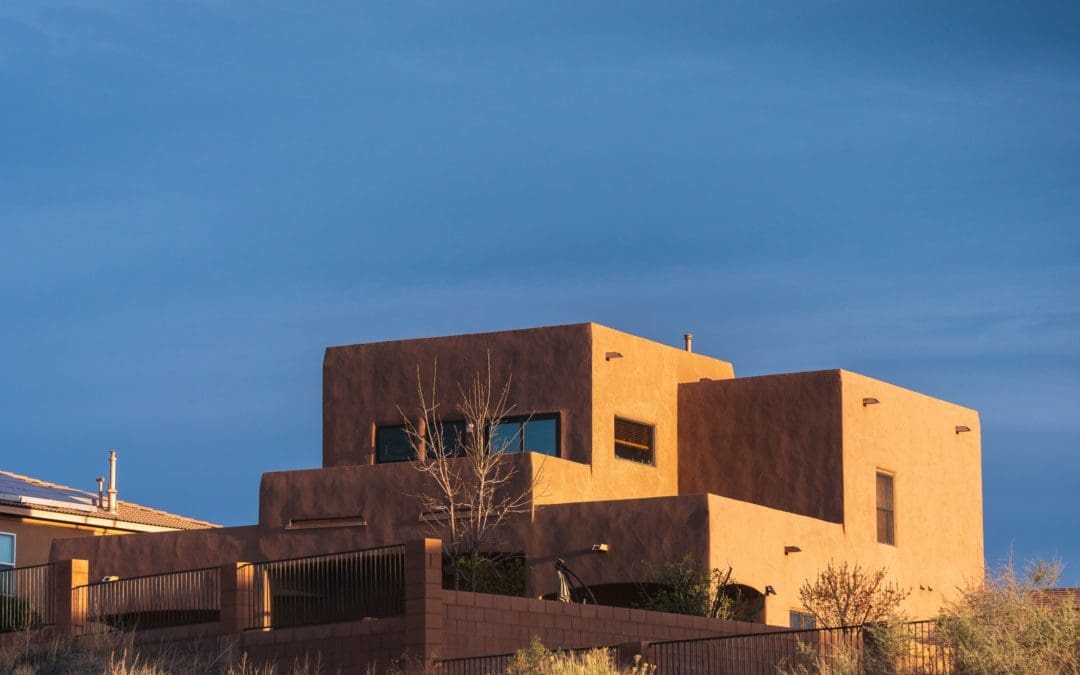 Today, we’ll be circling back to our “All About” series where we take a look at different styles of architecture. In this series, we aim to explore the characteristics of these styles, how they evolved, where they were most prevalent, and some of the best examples of the styles. Our goal with this series is to educate and inspire anyone out there who is interested in architecture! Last time, we discussed Art Nouveau architecture. Today, we’ll be taking a look at Pueblo Revival architecture. This style of architecture was inspired by a mixture of Spanish Colonial and Indian Pueblo architecture. It was popular between 1900 and 1940, but can still be seen today. If you are interested in learning about Pueblo Revival architecture, you’re in the right place. Let’s get started!

Sometimes called Santa Fe style, Pueblo Revival architecture is a regional architectural style, originating in the Southwestern United States. Pueblo means “village” in Spanish, and was a word used by Spanish explorers to describe dwellings they discovered. The style developed in the beginning of the 20th century and was inspired by traditional Pueblo architecture by the Pueblo people who were native to the area that is now known as the Southwestern United States, in areas such as New Mexico. It was also partially inspired by the Territorial style of architecture, which was developed and used in Santa Fe de Nuevo México, a kingdom of the Spanish Empire and New Spain. Pueblo Revival architecture was most popular in the 1920s and 1930s, but it is still commonly used for new buildings. In its prime, Arizona, New Mexico and California were the epicenter of this architectural movement.

Pueblo Revival architecture is still an immensely popular style of residential architecture in the Southwestern United States. The style draws inspiration from the sleek and simple multi-family structures built by the Pueblo Indians in 750 A.D. It also incorporates features that complement the structure’s natural environment in the same way that the traditional structures did, in order to pay homage to this culture and the region’s history. One key element of Pueblo Revival architecture is the use of earthy materials such as traditional adobe, which is made of sun-dried mud. Other materials used are concrete, stucco, or mortar. These walls are then painted in earth-toned colors to blend in or complement their environment. Another distinguishing feature of this architectural style is its use of large wood components, such as heavy doors, ceiling beams, and porch posts. The timbers or rafters often used are known as vigas, and are exposed at the ends. These wood components offer a contrast to the structure’s smooth walls.

The roof of a Pueblo Revival structure is often flat or slightly sloped and has added parapets, which are low walls that extend above the roofline. Sometimes, drainage canals known as canales are incorporated or substituted in place of parapets. Many structures built in this style have rounded exteriors with square windows that mimic the look of traditional Pueblo Indian structures. Because traditional Pueblo Indian structures were centered around a common space, Pueblo Revival buildings and homes often have enclosed and sheltered courtyards or patios. They are often enclosed by low walls and may feature built-in benches called bancos.

Interestingly enough, one of the reasons why this style of architecture is especially prevalent in the Southwestern U.S., besides its origin in culture there, is because it offers eco-friendly benefits for the hot climate. The thick, adobe or stucco walls make for great insulation against the elements, especially heat. This is great for desert areas like the Southwest, because it will help keep your home cool inside.

One of the architects credited with the development and popularization of Pueblo Revival architecture is John Gaw Meem IV, based in Santa Fe, New Mexico. His work was prominent in the 1920s, when he focused on the preservation of historic buildings and renovating buildings with the incorporation of adobe forms in modern architecture. Meem is known as the “Father of Santa Fe Style”. Another influential architect was Mary Jane Colter, one of the few female architects of the time. She is credited with helping create the Pueblo Revival style in the 1920s, by combining Spanish Colonial Revival and Mission Revival with Native American motifs.

Located in New Mexico, the buildings of this historic property were designed in the 1930s by John Gaw Meem, the influential architect mentioned above. Among the 25 acres of lavender fields in the heart of the Rio Grande River Valley, Los Poblanos is an inn and organic farm made up of 45 guest rooms on land that was originally inhabited by Pueblo Indians. Today, the buildings feature pitched tin roofs and the walls alternate between stucco, stained wood, and corrugated metal. One of the buildings on the property, La Quinta, features hand-carved ceilings and decorative Spanish tile. Another building, the Hacienda, boasts an elegant courtyard with massive carved doors, in true Pueblo Revival style.

Another architectural gem created by Meem is the La Fonda Hotel in Santa Fe, New Mexico. The building sits on the same site as the town’s very first inn, founded by the Spaniards way back in 1907. The structure that can be seen today was built in 1922 and features the influence of both Meem and Mary Jane Colter. Some of the hotel’s key features are its hand-carved beams, stained glass skylights, and terracotta tile. Colter renovated the interior, filling the hotel with unique furnishings inspired by Mexican inns as well as the addition of vigas.

Also located in Santa Fe, the New Mexico Museum of Art was designed in 1917 by Isaac Rapp, an American architect. It is one of Santa Fe’s best known representations of Native American and Spanish colonial designs. Elements and details of the building drew inspiration from mission churches created by the Pueblo people, such as the Acoma, Cochiti, and Laguna. The building features concrete, brick, and stucco, as well as wood elements such as vigas and canales.

As you can see, Pueblo Revival architecture is a unique fusion of the structures made by Pueblo Indians as well as Spanish colonials. It is a great way to preserve and showcase these cultures and traditions. We hope you found this article informative and we hope to see you back on the blog soon as we continue to dive into various topics regarding architecture. Perhaps something might spark inspiration for your next project! For more information on architectural design and building, keep up-to-date with the Architecture Plus blog. If you’re ready to sit down with an experienced team of designers and hash out the elements of your next project, reach out to us! We’re eager to hear from you. Until next time, thank you for reading!