All About Architecture: Bauhaus 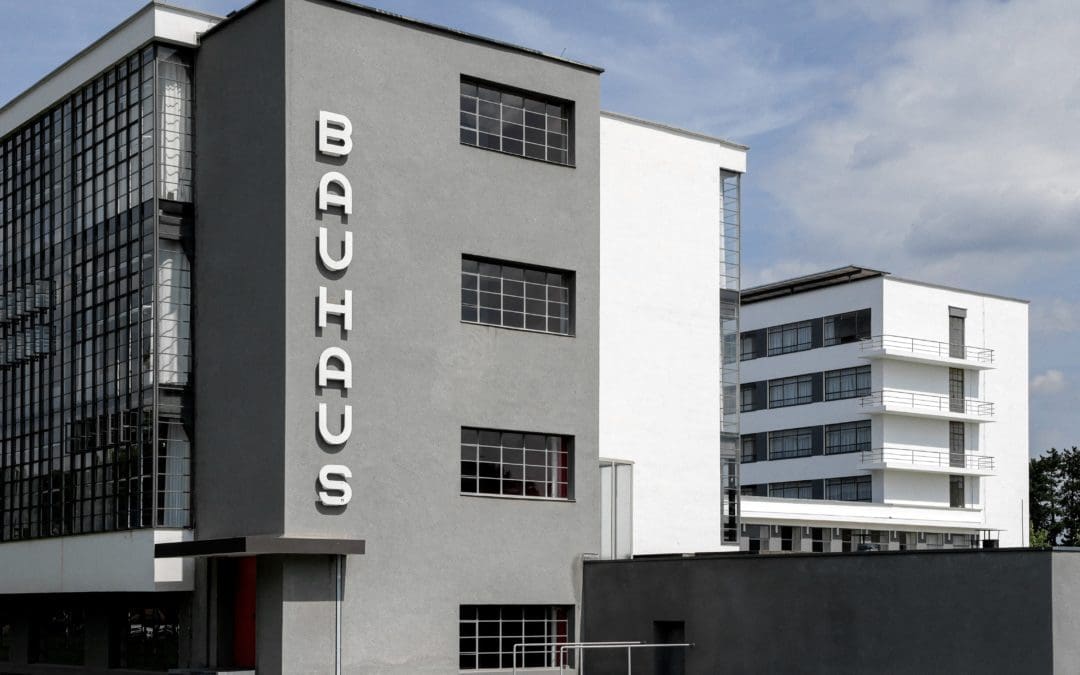 In our last blog, we continued our “All About” series where we take a look at different styles of architecture. In this series, we aim to explore the characteristics of these styles, how they evolved, where they were most prevalent, and some of the best examples of the styles. Our goal with this series is to educate and inspire anyone out there who is interested in architecture! The last style we discussed was Art Deco, which has its roots in the 1920s. If you’re interested in learning more about the Art Deco architectural style, we encourage you to check out our last post!

Today, we’ll be continuing this series by discussing the Bauhaus style architecture. This style is sometimes known as the International Style. Bauhaus is German for “building house” and comes from the name of a German art school named The Staatliches Bauhaus. This art school was in operation from 1919 to 1933 and became famous for its approach to design. It had a major impact on art and architecture in places such as Western Europe, the United States, Canada, and Israel. If you are interested in learning more about this architectural style, you’re in the right place! Let’s get started.

After World War I, which saw Germany’s defeat, there was a desire for radical experimentation in the arts and an effort to rebuild society. That’s when The Staatliches Bauhaus, commonly known as Bauhaus, was founded in 1919 by Walter Gropius, a German-American architect. Located in the city of Weimar, Germany, The Bauhaus style architecture combined crafts or trades as well as the fine arts and was created with the idea of creating a comprehensive artwork, in which all of the arts would be brought together. Gropius had a distaste for the rapid industrialization of the era without any thought for artistic quality, and he envisioned combining painting and sculpture with architecture– This was the German concept of Gesamtkunstwerk, meaning “total work of art”. The school merged the Grand-Ducal Saxon Academy of Fine Art with the Grand Ducal Saxon School of Arts and Crafts. The Bauhaus was heavily influenced by William Morris and the British Arts and Crafts Movement, which was an international trend in the decorative and fine arts. The movement took place between 1880 and 1920 and is the root of what later became known as the Art Nouveau movement.

The school moved to the town of Dessau in 1925, remaining until 1932 when it was forced out of the area due to Nazi control. It then relocated to Berlin as a private school in late 1932, still facing increasing political pressure and being denounced by the Nazi movement as “degenerate art”. The Nazis felt that the school was a “breeding ground” for radicals. The Bauhaus fell under pressure and closed in 1933. Despite this, the concepts of Bauhaus were still spread to other countries as artists, teachers, and students either fled or were exiled. They took the Bauhaus’s design ethic with them all over the world– From Chicago and Detroit to Tokyo and Tel Aviv.

One of the most defining characteristics of Bauhaus style architecture is its simplicity. You’ll notice that most buildings in this style lack ornamentation. This means that there is a lack of embellishment or decoration. Instead, Bauhaus is all about a simple, streamlined design with the use of functional geometric shapes. For example, many Bauhaus-style buildings have flat roofs to help achieve simplicity. This architectural style implements sleek, linear design through polished, smooth lines. To add to the simplicity of the style, a very simple color palette or scheme is often used– Typically white, gray, or beige. When it comes to the interior, primary colors may be used, but strategically placed. For example, a single red chair or a single blue wall.

Since Bauhaus focuses on simplicity and industrialism, buildings in this style tend to emphasize industrial materials. The materials are used in their purest form, rather than being altered in any way. This architectural theory is known as “truth to materials”. Additionally, the Bauhaus style aims to incorporate the fewest different materials possible. Some examples of materials used in Bauhaus architecture are glass, concrete, and steel. Another defining characteristic of Bauhaus architecture is its asymmetry. Symmetry was known as “excessively industrial” and was said to “lack artistic heart”. Bauhaus designers aimed to connect and balance buildings and rooms by incorporating the same elements throughout, such as repeating colors or the use of the same materials, rather than making all sides of the building the same.

Bauhaus has had an immense impact on architecture and design, and is often known as the most influential design style of the 20th century. Let’s take a look at some of the best examples of Bauhaus architecture that still exist today.

The Bauhaus Studio, known as Bauhaus Dessau, still stands in Dessau, Germany, today. It was designed by Walter Gropius and constructed between 1925 and 1926. Although the building was damaged in World War II, it was largely reconstructed starting in 1965. The building consists of five functionally structured parts with reinforced concrete-frame structures. These structures were arranged in such a way that it does not appear that the building has a “front”. Some of its most striking features include glass curtain walls and flat roofing, which are most often associated with the Bauhaus style.

Another great example of this architectural style is the White City, located in Tel Aviv, Israel. The White City is made up of 4,000 buildings constructed in the 1930s in the Bauhaus style. These buildings were constructed by Jewish architects who fled from Germany during the rise of the Navi movement. These buildings feature well-known Bauhaus characteristics, such as asymmetry, flat roofs, as well as an extremely simple color palette– White. In 2003, it was designated by the United Nations Educational, Scientific and Cultural Organization (UNESCO) as a World Cultural heritage site for its outstanding architecture.

Among other examples of Bauhaus architecture is the Gropius House, located in Lincoln, Massachusetts. After Walter Gropius fled Germany, he came to the United States to teach architecture at Harvard’s Graduate School of Design. While there, he designed the Gropius House as his family home. It combines traditional elements of New England architecture, such as wood, brick, and fieldstone, with materials such as glass and chrome banisters. It also features architectural style’s iconic flat roof and asymmetry. Today, it is a historic house museum.

Besides architecture, Bauhaus’s influence can be seen in things like graphic design and even furniture design. But did you know it has also influenced an incredibly common part of many peoples’ everyday lives? In fact, we may be more familiar with the Bauhaus style than we thought. Believe it or not, the iPhone is inspired by Bauhaus. Steve Jobs has stated that the iPhone’s initial designs were influenced by the style– The iPhone’s sleek lines and lack of decorative detailing, as well as its rounded edges are reminiscent of the Bauhaus design style. Just like the Bauhaus ethic, the iPhone, like many Apple products, favors function over form.

As you can see, Bauhaus architecture is an intriguing style that defies normalcy– And symmetry. Its influences can still be seen today in many aspects of design, including furniture, and even devices like the iPhone. Architects that came after Gropius were also heavily influenced by the style. We hope you found this article informative and we hope to see you back on the blog soon as we continue to dive into various topics regarding architecture. Perhaps something might spark inspiration for your next project! For more information on architectural design and building, keep up-to-date with the Architecture Plus blog. If you’re ready to sit down with an experienced team of designers and hash out the elements of your next project, reach out to us! We’re eager to hear from you. Until next time, thank you for reading!